On closer inspection, Reginald could see that it was not a cloud at all but a bicycle-type contraption with little seats. There was no floor beneath them, but rather three sets of pedals which were attached by long chains to two paddles that moved up and down the same way ducks’ feet work under the water. On the back, just behind Reggie’s seat, was an old rattling motor that blew out dry ice which encircled the Thumblator to give it the illusion of being a cloud, but how it floated was, on first glimpse, not evident.

“Quick, pass me the jar,” said Seamus with an element of urgency in his voice. Reginald grabbed the small jar from the inside of his jacket pocket and passed it forward. With Sid’s head still lolloping about on his shoulder, out cold, Seamus opened a hatch on the front of the control panel of the Thumblator and, taking the cork out of the jar, grabbed the wuddlepup and squeezed it tightly with both hands, twisting it to get out all of its pink juice. Reggie leant over the side of the Thumblator, heaving at the sight of such a barbaric act. Totally unmoved by his own actions, Seamus began messing around with the controls as they lifted up into the air. “Pedal like a banshee,” he cried, and, as they sped off at knee height up the ramp and dodged the burning struts with no sign of Rookinda, and out through the opening of the lair, the purple slug that Reginald had left on the floor of the giant birdhouse exploded, sending a jet of flames out through the opening behind them. (…)

Sid slowly came to. He lifted his head from Reginald’s shoulder and rubbed his eyes. Looking about himself, there seemed to be nothing but a swirling mass of mist. Reginald sat next to him, wiping down his shoulder with a white hanky.

“Thank you for dribbling all over my tweed,” groaned Reggie in an affronted manner.

“Where are we?” Sid’s voice had an air of poorly hidden desperation in it.

“Would you mind just popping your feet on those pedals there,” interjected Reggie. “It’s just that I’ve been pedalling for thirty minutes carrying your lump of a body around. I nearly threw you over the side twice, and had your belt taken your weight and not snapped while I was trying to heave you out, I’d have succeeded,” Reginald said as he handed Sid half of a leather belt.

“What? Seamus would never have let you.” Sid looked at the pair agog.

“On the contrary, he helped me,” scoffed Reginald as Seamus turned in his seat and handed Sid the other half of the belt.

“Sorry there about that, but he’s very persuasive don’t ya know,” winked Seamus.

“We’re in my Thumblator, by the way. It’s how we little people have been travelling about for hundreds of years without you giants noticing us. Why do you think we always turn up at the end of a rainbow! We can only travel when there are lots of clouds so as not to be noticed.”

“So we’re in the air? And those?” Sid pointed at the swirling mists around him. “Those are clouds?”

“Oh yes,” nodded Reginald, “you’d have seen them close up if that cheap belt had held together.”

“Right, we’re going down,” screamed Seamus as he pushed a big red button in the centre of the control panel and grabbed the sides of the Thumblator as it took a nose dive down through the clouds. Bursting out through the base and leaving a trail of dry ice like a comet hurtling towards a very unsuspecting earth, Reggie and Sid held each other tight, screaming in panic with their eyes shut firmly.

Seamus just sat at the front, laughing like a schoolboy on a roller coaster. The Thumblator, gaining speed, rocketed towards a ring of cloud circling an island, which was surrounded by a harsh looking sea. As they got closer to the island, the craft did not seem to slow down. Seamus appeared to be steering it towards a hole in the side of a mountain by leaning to the left and then to the right. It looked like the biggest of the mountains, and yet the hole seemed just big enough to take the little craft. Reginald and Sid lifted their feet away from the pedals which were now spinning so fast that they were unable to keep up with them, and the two paddles at the rear of the Thumblator were wagging up and down like the back end of a demented duck.

“Hold this,” shouted Seamus as he passed back his top hat. “Hold it tight!” They did as he said and, as they shot through the opening in the mountain into a huge empty shell of a volcano, the top hat filled with air and trebled in size. The three of them held on to it as it doubled as a crude parachute. The Thumblator, however, continued on its collision course with the opposite side of the interior wall of the volcano, exploding in a burst of red flames and blue lightning.

From the novel The Heart of Sitnatia by Adam Biggs, Il Moscardino 2012 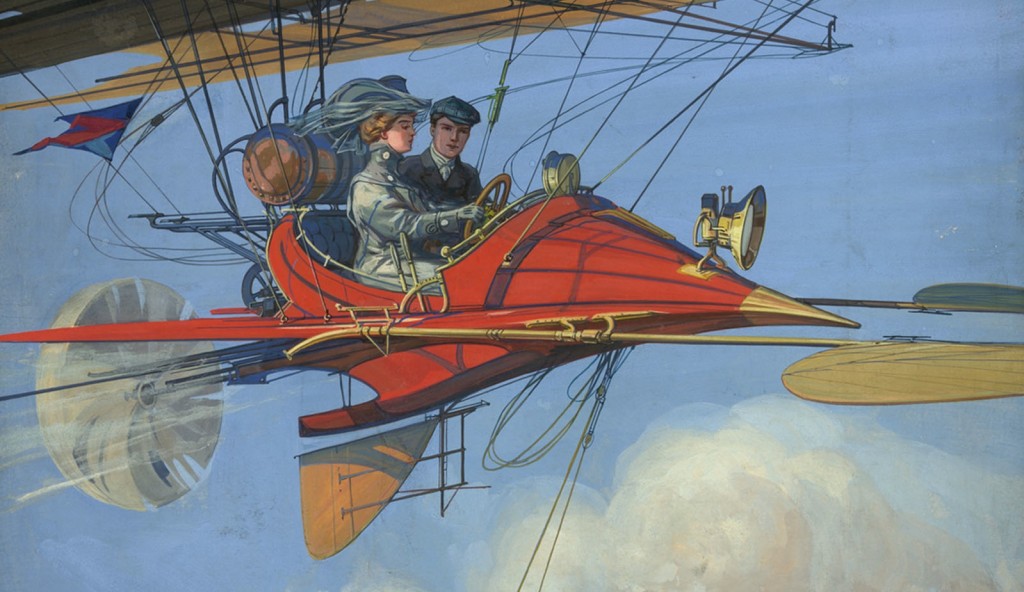