Adam, why was Book Two, The Curse of the Vendra, written? Was the original intention to write a sequel?

Adam Biggs: Yes. Not just one sequel but a series of books following the adventures of Amelia, Arthur and Reginald. It has always intrigued me what happens to characters in a book once the final page has been read. The books will help build a life to the characters rather than just the time span covered in the novel.

Book Two has only Arthur Pound as the familiar character. Does this mean Amelia and Reginald feature in later books?

Adam Biggs: Yes. All three are reunited in the third book. In fact, it follows on just a few weeks after the end of Book One, so the reader can get a feel of “what happened next”…

Book Two shows Arthur being sent back in time. Will time travel be a big part of the series?

Adam Biggs: The intention is to alternate the books between the two time lines. So Book One, Three, Five, etc. will follow Amelia, Arthur and Reginald in the modern day but refer to events of the past. Book Two, Four, Six, etc. will follow Arthur’s life in the past covering his one hundred year time-shift. For example, a friendly ghost met by the trio in the modern day may be a real person that Arthur deals with in the past. Each book will add new twists to previous books, despite them being in different time zones.

So how was The Curse of the Vendra originated? Book Two is now a dual effort – why was this?

Adam Biggs: It really was a blank canvas. As part of the idea generation, I asked Tim to give me some weird suggestions to include in the book. The fun thing about fantasy writing is that anything can happen! Tim challenged me to include the following random scenarios: a cross-eyed bumblebee that has difficulty flying, a pantry that contains evil jam jars, a wooden battleship infested with woodworm, and rocks that float…
I then started to build a story and did my best to incorporate these things, some of which became major parts of the book. I wrote in excess of 37,000 words. At this point I shared my writings with both Tim and the publisher. She commented that she liked the story but that perhaps I could include a larger-than-life “woman with a small yapping dog” to add some humour in an unfortunate incident which was a side-line to the main story.
When Tim read the story that I had written, he noted that the two individuals that Arthur took on his adventure, the wise old man Septimus Greeb and Professor Archibald Anvil, were both male. This, in addition to the Vego-Shmeer, Baron von Posch and General Klaus characters, made the book predominantly driven by male characters. Both of us loved the thought of including the publisher’s “woman with puppy”, however Tim wanted to take it further and replace Professor Archibald Anvil using Professor Agatha Anvil with her puppy as a side kick to correct the heavily one-sided nature of the male characters in the novel.
With the general storyline understood, Tim offered to amend the document, which allowed me to start thinking about Book Three.
Tim’s intention was to include more descriptive writing to give the reader better details as to the surroundings and scenarios, narrative between characters, amending all references from the male professor to the female professor, and including chapters solely dedicated to the puppy and her view on the world.
This took a long time and increased the volume of chapters significantly, but all liked how the new version read. At times it was challenging – in one instance in the original version Arthur was meant to impersonate the male professor. Now that the professor was a large and dominant woman, this allowed extra humour to be included with the impersonation still going ahead, instead of re-thinking and re-writing the entire chapter.
So it was definitely a dual effort, as both Tim and I had involvement in original concept, story development and writing.

You mention Book Three. This is already in progress, right? What can we expect from this and other currently unwritten books you mention?

Adam Biggs: Yes, I am up to 30,000 words of Book Three which sees Amelia and the others in another fantastical predicament. Similar to Book Two, Tim gave me some random scenarios to include. These won’t be disclosed here as they have been built in with some twists and turns the reader must go through prior to them being revealed.
Even though Book Two ends with something of an intriguing finish, you will have to wait for Book Four for that timeline to progress. Also, things that are revealed in Book Four will make you change your perception of Book Three – you’ll be keen to get your hands on Book Five to see what happens next…

Tim, tell us… what are the essential ingredients for a successful fantasy novel?

Tim Hodge: I think a successful fantasy novel takes the reader somewhere they weren’t expecting to be taken. Whether this be a magical land with monsters and heroes or somewhere closer to home but with an unusual twist that implies that some people are living a more extraordinary reality than our own. It will have events that the reader can relate to but also have unusual or bizarre events which catch the reader off-guard. When reading a book, fantasy or not, most people will think ahead with where they think the story is taking them. In a crime story the reader will be thinking about “who the guilty person is”, in a love story whether the couple will get on or not. In a fantasy novel the storyline can be wildly unpredictable and allow the writer’s imagination to run wild to take the reader on a very unexpected journey.

How would you explain the growing interest in fantasy novels?

Tim Hodge: With big budgets and special effects, fantasy novels are increasingly becoming the origins of successful movies and are entertaining audiences who would not have previously been exposed to such literature. I know many people who watched Lord of the Rings and then wanted to read the books even though they had shown no interest in fantasy novels prior to watching the movie! I think it is great having more and more fantasy novels available. It means wider choice for the reader and it means writers are having to come up with new ideas.

Tell us about your co-writing experience with Adam…

Tim Hodge: I’d like to think we work well together and bounce ideas of each other. We rarely write together, it’s more idea sharing that is done, and instead of telling the other one that an idea won’t work, we discuss it unless we think it can work. Adam does frustrate me at times; he likes to write the dramatic paragraphs, and when writing will jump from one event to another without the reader (or me) knowing how we got from “event A to event B”. But it means that I get to write a lot of the descriptive sections, explaining where people are, conversations between characters, adding a little depth to some of the individuals in the story. I then often re-write his pages to tie them in better with more sections (which have often gone off onto a tangent) and work out how to incorporate the key concepts from his work so that they fit well together. He says, when I read the completed chapter back to him, it’s like a brand new story, but exactly what he’d meant to have written had he fleshed it out himself!

Is there a character in the novel you feel particularly connected to?

Tim Hodge: I guess in Book Two it would have to be Pepper, the adorable puppy. It was actually the publisher’s idea to include the puppy in a one-off event at the start of the book, after reading the first draft, but I loved the idea given to us and was keen to incorporate Pepper as a large part of the story. Adam believed it would be too much work to re-write the entire book but I said he could leave that to me. My brother had just bought his family a golden retriever puppy for Christmas and unfortunately, due to medical problems from birth, she only survived six weeks. My nieces were devastated with the loss of their first ever dog so, although she isn’t a golden retriever in the book, Pepper will forever be remembered in our hearts and now in literature, despite being around for just a short few weeks.

Tim, what can we expect to happen in Book Three?

Tim Hodge: Hopefully, without giving too much away, in Book One we witness a battle between Gods, Book Two is a giant sea monster lurking beneath the depths and now, Book Three gives us an invasion of creatures who have human children at the top of their menu. We are back in present day and see Amelia, Reginald and Arthur reunited, with encounters from new friends who get dragged into the chaos. And with Reginald’s sister joining the group, along with her entourage of ghostly ex-husbands, help is never too far away…

I really can’t wait to read all about it… thank you Adam, thank you Tim! 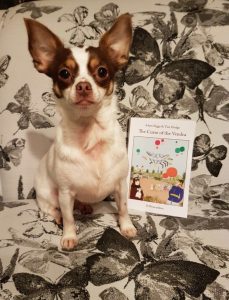