The Curse of the Vendra, by Adam Biggs and Tim Hodge

Unintentional time-traveller Arthur Pound, the snooty Professor Anvil and an aging sage find themselves travelling together to find a lost legion of warriors somewhere in the North Atlantic Ocean.
During an expedition with the Professor’s flying prototype, they must evade the clutches of the jealous Baron von Posh and the Kaiser’s royal guard whilst far below them, in the ocean waters, a far greater menace is growing in strength.
The mighty Vendra warriors’ battleship becomes an unwelcoming home for the trio, while the catacombs within the Floating Rocks uncover surprises with every step. Arthur finds himself defending his innocence from the magical Order of Sight, whilst his companions explore the Vendra’s massive fortress including their library which holds a disturbing secret.
A larger threat raises its head in the form of hideous hibernating creatures with a devious plan involving summoning a monster from the very depths of the ocean. Will Arthur and his team have to join forces with the Vendra to defeat the lizard witches or do the mysterious Lamia have another even more monstrous secret to unleash on the world?

“The Curse of the Vendra” (Book Two of the Sitnatia series), a fantasy novel by Adam Biggs and Tim Hodge
smarturl.it/Vendra_Paperback 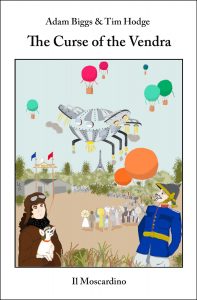